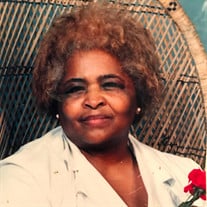 Ollie Pearl Prince was born on January 23, 1937 in Webb, Mississippi to the union of Floyd Noel and Emma Prince. She had eight sisters and six brothers. Ollie was raised by Nancy Bradford, whom taught her how to sew and cook. At a young age, she attended Clarksdale High School in Clarkdale, Mississippi. She later continued her education pursuits and graduated from Kennedy King College and received her associates degree in Food Service, Sanitation and Management. Ollie lived on 66th Place in Chicago, Illinois since she was 21 years old. She was baptized at Mt. Pleasant Missionary Baptist Church under Reverend Cornelius. In 1959, Ollie married Leonard Walker Sr. She had eight children; five boys and three girls. Ollie worked for the Board of Education for 25 years a Cook Supervisor. While working for the Board of Education, she also worked as a Housekeeping Supervisor for Hilton & the Palmer House Hotel for 30 years. She retired from both jobs and continued to support her family. She was very independent and a strong woman with class that took pride in her work ethic and family values. In 1978, she bought her first home on 66th & Blackstone. She was a pillar to her community who loved to give back. As the heart of the family, Ollie made sure to promote the importance of family as she cherished moments with her children, grandchildren, and great-grandchildren. Her favorite things to do were sewing. She spent hours sewing clothes for her family throughout the summer. She loved designing and making African clothing. Ollie had her own fashion label and could create anything with any type of material. Some of her favorite things to do were watching Soap Operas, shopping, and readingthe Bible, Tony Morrison and James Baldwin. Ollie loved to listen to music, especially the Blues. Some of her favorite artist were The Temptations, BB King, Bobby “Blue” Bland, Aretha Franklin and Patti Labelle. One of her proudest moments was to vote for our first African-American President Barack Obama. She was a great talker and an even greater listener. Her love lives on through us all. Ollie is preceded in death by her loving Mother, Mary (Emma) Kirkham and Father, Floyd Noel, her brother’s Jimmy Kirkham and Alfred Kirkham, her beloved daughter, Theresa King, beloved son, Leonard King Jr, and beloved grandson, Kenneth Owens. Ollie leaves to cherish her memory her children: her sons, Nathaniel Walker, John King, Raymond King Sr., Alexander King and daughters, Janet King and Leontyne King; her grandchildren: grandsons, Jason King Sr., Allen King, Raymond King Jr., John King Jr., Michael King, Corey King, and granddaughters Amelia King, Ollie King, Dana Jeffries-King, Janna King and Raeven King; great-grandsons, Jason King Jr., Jayshawn King, Jalen King, Jamari King; great-granddaughters, Kassidy Owens, Ava Pearl King, Rylee Zion Renee King, and Blake Asé Jeffries-Clayton; her siblings: her sisters, Mary Buchanan, Slyvia Little, Rosetta Woods, Flora Perrin, Ester Howard, Elizabeth Helms, Bettye Kirkham, Catherine Landfair and her brothers Willie Kirkham, Henry Kirkham, Calvin Kirkham, and Glen Kirkham; and a host of nieces, nephews, other relatives and friends.

Ollie Pearl Prince was born on January 23, 1937 in Webb, Mississippi to the union of Floyd Noel and Emma Prince. She had eight sisters and six brothers. Ollie was raised by Nancy Bradford, whom taught her how to sew and cook. At a young age,... View Obituary & Service Information

The family of Ollie Pearl King created this Life Tributes page to make it easy to share your memories.

Send flowers to the King family.