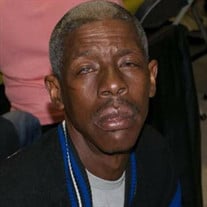 Otis Barnes was born on April 15, 1964 in Little Rock, Arkansas to the union of Able and Loren Barnes. Otis grew up in Ford Heights, Illinois, where he attended School District 169. He later graduated from Bloom Trail High School. Otis, affectionately known as “Bay Bay”, had a big heart and an even bigger personality. Otis touched many people, he had an ability to make a crowd smile with his charm and presence. Otis extended his love to the Hollins and Thomas family’s where he helped raise many children. On Friday morning, May 15, 2020, Otis departed this life. He was preceded in death by his father, Able; two brothers, Dorsey and Fred; and one sister Barbara Ann. He leaves to cherish his memories, his loving mother, Loren Barnes; his son, Roshawn Andrews; two grandchildren, Roshawn Andrews Jr. and Romya Andrews; five sisters, Bernice (Pastor Roy Rice), Letitia (Jerome) Austin, Tiffany Butler, Angeline Jackson, and Angenette Jackson; one brother Able (Sally) Barnes; also his loving brother Rodney (Sonija) Hollins; Otis had many special people in this life too many to name; and a host of nieces, nephews, other relatives, and friends. We all loved you, but God loves you best!

The family of Otis Barnes created this Life Tributes page to make it easy to share your memories.

Send flowers to the Barnes family.