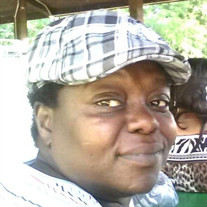 Pamela Rogene Knox was born May 3, 1968 in Chicago, Illinois to Barbara and Bobbie Wyche. She was the youngest member of their family and was affectionately known as “Little Bit” and “Little Momma”. On December 12, 1991, Pamela married her beloved husband Danny Knox. They had a loving union of 27 years in which they raised 4 beautiful children. Pamela began studying with Jehovah‘s Witnesses and dedicated her life to Jehovah through water baptism. Even though Pamela was seriously ill, she courageously refused to compromise her beliefs by accepting medical treatments that conflicted with her faith. Pamela attended Crispus Attucks Elementary School and Dunbar Vocational High School in Chicago. She later relocated to Burlington, Iowa where she received her CNA License from Southeastern Community College. In 2005, she became a business owner and opened Hilltop Daycare. Pamela was loved by her daycare kids and their parents. Pamela was very talkative and loved to cook, fish, read the Bible and spend time with her eleven grandkids. Pamela Rogene Knox, 51, of Chicago, IL formerly of Burlington, IA, fell asleep in death on Tuesday January 21, 2020. She was preceded in death by her parents Barbara and Bobbie, her sister Helena, her brother Greg, and her mother and father-in-law Marthella and Willie Knox. Pamela leaves to cherish her memory, her husband Danny Knox; her children Danelle (Theodric) Williamson, Mark Lee, Devon Lee, and Tamela Knox; grandchildren Dante, Davion, Evan, Lavon, Madisyn, Danny III, Kadaria, Elijah, Aubrieanna, Devahea and Aaliyah; brothers Marko, Robert, and Eldnor; sisters Deanna, Stephonie, Julianna, and Barbara; and a host of nieces, nephews, other relatives, and friends.

The family of Pamela Rogene Knox created this Life Tributes page to make it easy to share your memories.

Send flowers to the Knox family.