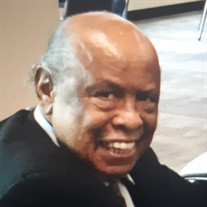 Peter Eugene Smith was born on May 26, 1939 in Chicago, Illinois to William David and Willa Lee Smith. He was the third of eight children. Peter enjoyed fishing, baking rum cakes, and working on various projects with his hands. He attended Dunbar Vocational High School and became skilled in carpentry. He graduated from Dunbar in 1957. After graduation Peter served in the military for 12 years, and upon returning home, he began working with the CTA as a bus driver. While at this job he met the love of his life, Kathey Brooks, and they were married in 1977, together they raised her daughter, Lisa Denise Brooks. Soon thereafter, Peter began studying the Bible and dedicated his life to Jehovah. He was baptized as one of Jehovah’s Witnesses in Milwaukee, Wisconsin in 1978. One of the privileges he enjoyed in the past was serving as a ministerial servant with the Stony Island Congregation. He also had the privilege of working with the trucking department at district conventions of Jehovah’s Witnesses. Later, Peter was assigned to the University Congregation, where he enjoyed working with various brothers in the field ministry and going on Bible studies with them. Peter was known as a person with a good personality and who enjoyed a good laugh. When asked how he was doing, he would almost always reply “Fair to Midland!” He came from a large family of eight children, four boys and four girls, and he loved spending time with them. He enjoyed going on fishing trips with his brothers and going to family reunions where he could “crack” jokes with his sisters. As he got older, he continued to fish, and he found a close friend in Willie Spight who became his “fishing buddy.” Peter and Kathey also enjoyed going on long weekend road trips with his brother-in-law, Welton Harris, and his wife, Roystene. Peter also loved his spiritual family, the friends in the congregation. He enjoyed going to conventions with them, getting together with them at the Kingdom Hall as well as at congregation gatherings. On occasion Peter would even have them over to his home. He was a loving father and brother who cared for the needs of others and was generous to all he met. He will truly be missed. Perry Eugene Smith fell asleep in death on December 24, 2020. He was preceded in death by his wife Kathey Smith, his parents, and his two older brothers, William David Smith Jr., and Richard Lee Smith. He also leaves to cherish his memory, his daughter, Lisa Denise Brooks, his remaining brother and four sisters, Joan Fields, Patsy McDonald, David Smith (Lourie), Marion Love (Joseph), and Vanessa Smith. His in-laws, William Harris (Thelma), Velma Seals, and Welton Harris (Roystene), along with a host of nieces, nephews, cousins, and spiritual brothers and sisters.

Peter Eugene Smith was born on May 26, 1939 in Chicago, Illinois to William David and Willa Lee Smith. He was the third of eight children. Peter enjoyed fishing, baking rum cakes, and working on various projects with his hands. He attended Dunbar... View Obituary & Service Information

The family of Peter Eugene Smith created this Life Tributes page to make it easy to share your memories.