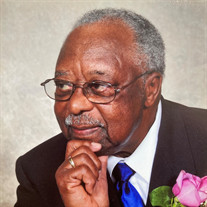 Pharlis R. James Sr., first child of Zettie Mae and Robert Edward James, was born March 12, 1930, in Egg Harbor City, New Jersey. He was the oldest of eleven children. He attended Egg Harbor High School where he participated in football, basketball, and baseball before graduating in 1948. He then moved to Chicago at the age of 18, to help support his family back home. There, Pharlis met Dorothy Jackson and they wed June 3, 1951. From this union, two sons were born. Pharlis was a successful insurance salesman from 1962 until his retirement in 1992. He received recognition and awards that allowed him and his wife to travel to many countries including Austria, Germany and Switzerland. But as he would playfully tell his great grandchildren, he “had 7 jobs before that.” Pharlis was introduced to Jehovah’s Witnesses and was baptized in 1975. He remained an active and faithful member of the congregation throughout the rest of his life, serving as an Elder and attending pioneer school twice. His devotion to his family was just as strong. He dutifully and patiently cared for his wife until her death in September 2007, after 56 years together. Pharlis later met and then married Cecilia Salazar. They wed June 6, 2009, sharing 12 years together. Ceci brought a new happiness to his life and thoroughly and lovingly cared for him until his final moment. Pharlis peacefully departed from this life on October 30, 2021, at his home in Downers Grove, Illinois. Pharlis was preceded in death by his parents and eight of his brothers and sisters: Theodore, Goldie, Gilbert, Vernon, Connie, Joseph, Barbara, and Bertha. He leaves to mourn, his wife Cecilia; two sons, Pharlis Jr. and Byron (Sherri); three granddaughters Pharlicia, Sherron, and Kristen; six great grandchildren Puriel, Jaylon, Alyssa, Donovan, Ariel, and Apollo; one sister Rennae; one brother Nathaniel; and a host of other relatives and friends. All of whom thank you for your encouragement and support during this time.

The family of Mr. Pharlis R. James Sr.. created this Life Tributes page to make it easy to share your memories.

Send flowers to the James family.