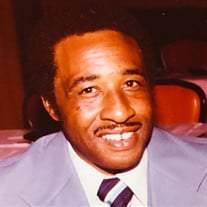 Ralph Ray Tyree was born on June 5, 1933 in Toledo, Ohio and died on May 8, 2020. He was the third child to bless the marriage of Leonard and Ruby Tyree. As a young man, Ralph joined the US Army and served until his highly decorated honorable discharge. He relocated to Chicago, Illinois where he met the love of his life, Yvonne Disroe. They were married on December 24, 1953 and to this union were born six children. Ralph worked secularly as a machine operator at International Harvester for over 30 years. He was always known to be a hard worker and dependable colleague. Ralph began studying the Bible seriously after being introduced to Jehovah’s Witnesses by his mother Ruby. After making a personal dedication to Jehovah God, he was baptized as one of Jehovah’s Witnesses in 1981. Six months after being baptized he became a full-time minister (pioneer), volunteering his time teaching people the truth of God’s Word the Bible. He was soon joined by his wife Yvonne. Together they served in this work side-by-side for over 40 years, which brought Ralph immeasurable joy. Many of his students dedicated their lives to Jehovah and were baptized. For the past 35 years, Ralph served as an elder in the Beverly Congregation of Jehovah’s Witnesses. He built a strong reputation as a zealous minister, an effective teacher, and a supportive friend to so many. Ralph was a music enthusiast, and he loved to sing. He also loved to host BBQ’s and gatherings for family and friends, and if you were a guest in his home you would have to sing karaoke. Ralph is preceded in death by his parents, Leonard and Ruby along with his siblings, Beatrice, Rufus, Jerry, Leonard, Clifford, Catherine, Deanna, Dorothy, Wilford, and Andrew; and his granddaughter, Janelle. He leaves to cherish his memory, his loving wife of nearly 67 years, Yvonne; his six children Janice, Keith, Valerie Renee´ (Rodney), Ralph Jr., Charlotte (Earl) and Carlos (Patricia); his siblings Helen and Jean; his nine grandchildren, eight great-grandchildren; along with a host of nieces, nephews, relatives and countless friends.

Ralph Ray Tyree was born on June 5, 1933 in Toledo, Ohio and died on May 8, 2020. He was the third child to bless the marriage of Leonard and Ruby Tyree. As a young man, Ralph joined the US Army and served until his highly decorated honorable... View Obituary & Service Information

The family of Ralph Tyree created this Life Tributes page to make it easy to share your memories.

Send flowers to the Tyree family.