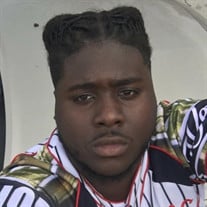 Rameer Jamar Hodges was born in Chicago, Illinois on August 2, 1991 to the union of Jesse Hodges and Rita West-Hodges. Rameer Hodges, affectionately known as “Meer Meer” was the second child of four children. Rameer was nurtured academically at George M. Pullman, Samuel Gompers and Carver Military where he attended high school. He then attended South Suburban College in 2016 and obtained his GED. Rameer was finishing his training to obtain his CDL from Progressive Trucking School. Rameer was baptized and nurtured spiritually at Reformation Lutheran Church. Rameer was a hard working young man that worked at Ford Motor Company. His pastimes included playing his game, “turning up”, watching his favorite team the Chicago Bears, and eating. Rameer was very family oriented and loved spending time with loved ones. He was outgoing, playful, and very protective of the women in his family. A few of his favorite quotes included “I’m getting Money, Don’t let nobody put yo hands on you, Fukay (in his younger days)”. He was a truly extraordinary individual that touched many lives in a positive way. He greeted everyone never forgot to tell you he loved you when leaving. Rameer’s energy and smile was enough to light up a room. He brought the life and the laughter at the party always with a positive attitude, you knew when he arrived. On October 25, 2018, Rameer made his transition. He was proceeded in death by his grandmothers, Golyen West and Louetta Hodges; his uncle, Micheal Hodges; cousin, Earnest “Ej” Roberts; godbrother, Johnny Qualo Tinsey; and a host of great uncles and aunts; and his baby, his dog, Gucci Hodges. Rameer leaves behind, his two kids (his dogs) Isis Hodges and Bleek Hodges; his mother and father, Jesse Hodges and Rita West-Hodges; siblings, Rejes, Jayda and Shamarr; two nephews, Rejes and Kameron; niece, Arielle; a fiancé, Kwuanitra Dockery; and a host of cousins, god siblings and friends.

Rameer Jamar Hodges was born in Chicago, Illinois on August 2, 1991 to the union of Jesse Hodges and Rita West-Hodges. Rameer Hodges, affectionately known as &#8220;Meer Meer&#8221; was the second child of four children. Rameer was nurtured... View Obituary & Service Information

The family of Rameer Jamar Hodges created this Life Tributes page to make it easy to share your memories.

Rameer Jamar Hodges was born in Chicago, Illinois on August 2,...

Send flowers to the Hodges family.