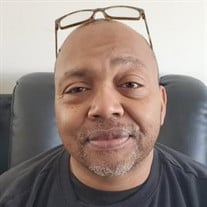 Raymond E. Harris was born in St. Louis, Missouri on March 20, 1962. One of six children born to Earlie B. Patterson. Being raised in Harvey, Illinois, he attended Thornridge High School. Raymond furthered his education at Southern Illinois University for Auto Mechanics. Raymond was a jack of all trades. He took up wielding, carpentry, business, and plumbing just to name a few. What he grew a love for the most was auto mechanics. Raymond was very generous with his knowledge. When it came to fixing cars he taught anyone who was interested…. and loved to help people, genuinely. Raymond was married twice before he met the love of his life, Raquel Hill. They made their love official on December 23, 2002. From then on Raymond committed to being the best husband, father, grandfather, brother, uncle, and friend that he could be. Despite his health, Raymond went that extra mile to help any and everybody. Raymond enjoyed watching movies, playing cards with family, cracking jokes at the most inappropriate times, loved to fish, and loved to listen to the blues. Unfortunately, Raymond fell asleep in death on April 2, 2021. He was preceded in death by his mother Earlie B. Patterson, and his brother Eddie Patterson. Raymond will be truly missed by all, but especially by his wife, Raquel; children Raymond E. Patterson, Jr., Emanuel Carlton, Eric Ridgner, Rachel Ridgner, Mia Ridgner, Matthew Ridgner, Re’Mon Ridgner, Ramica Ridgner, Dominique Patterson, Thalia Patterson, Raven Patterson, Jaden Harris, and Laila Harris; siblings Shirley Harris, Calvin Harris (Chris), Rose Ketchum, and Diane Patterson; a host of grandchildren, nieces, nephews, cousins, and friends.

The family of Mr. Raymond Earl Harris created this Life Tributes page to make it easy to share your memories.