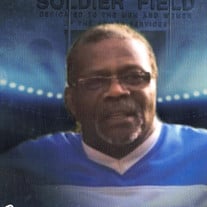 Richard Earl Thompson was born on June 9, 1950, in Chicago, Illinois. He was the oldest of ten children. His parents, Wesley Earl Thompson and Arletha Thompson, both of whom preceded him in death. Richard graduated from Delano Elementary School and then he attended and graduated from Cregier High School in Chicago, Illinois. Following his graduation, Richard entered the workforce in several different fields, including Healthcare at Saint Mary of Nazareth Hospital and Manufacturing with Mars Candy Company. Richard found his niche working for the United States Postal Service and after more than 30 years, he retired. Richard’s fun personality and smile were contagious to everyone he met; and he impacted so many lives of those he touched. Richard was an avid music lover and he especially loved Soul, Jazz and Blues. He also loved playing Bid Whist and boy did he hate to lose; but it was always in fun and laughter when he did. Richard was also a huge Chicago Bears fan, and if possible, he never missed a game. He’d be ready at kickoff with his Bears gear on, excited to watch the game. Richard loved being around his family so much that he started a family reunion with all his siblings and that tradition continued for years. Every year he had tee-shirts made for everyone because he wanted the family to stand out and look alike. Richard was a great cook, and his specialty dish was lasagna…and it was delicious! For any family events we had, before we could even ask, Richard would say, “I know ya’ll want me to make my lasagna.” Richard went home to be with his Lord and Savior, Jesus Christ on Friday, January 7, 2022. At the time of his death, he was a member of Broadview Missionary Baptist Church in Broadview, Illinois. Richard leaves behind a lifetime of love and wonderful memories. He is survived by his wife Fanita “Elizabeth”; his son Richard “Boosie”, who preceded him in death, his son Xavier, his stepson Jackie Thompson, and all his siblings: Wesley Jr. (Pamela), Stanley (Joanne), Sabrina (Cornelius), Darrell, Vanita, Eric, Sharon, Tiffany, Cleven; and a host of grandchildren, nieces, nephews, cousins and close friends. Richard you are greatly loved, and we will all miss you tremendously. Until we meet again, we will continue looking until Jesus, the Author and Finisher of our Faith.

Richard Earl Thompson was born on June 9, 1950, in Chicago, Illinois. He was the oldest of ten children. His parents, Wesley Earl Thompson and Arletha Thompson, both of whom preceded him in death. Richard graduated from Delano Elementary School... View Obituary & Service Information

The family of Mr. Richard Earl Thompson created this Life Tributes page to make it easy to share your memories.

Send flowers to the Thompson family.