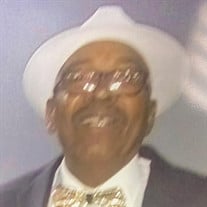 On April 14, 1935 in Flora, Mississippi, Cornelius and Emma Sayles Jefferson welcomed their fifth of 14 children into the world…..Robert Cornelius Jefferson, who was mostly known as R.C. or Bob.   Robert spent his entire childhood in the backwoods of Mississippi on land that his father proudly owned. While Robert did receive his education in the Andrew Chapel School system, his real schooling came from home and his classroom was the family farm. That’s where he learned the importance of hard work and how to appreciate the benefits reaped from doing so. These two lessons cultivated qualities in him that he continued to display for the rest of his life. In 1955, Robert married his first love, Mary Louvenia Brown. Robert fathered two daughters with Mary, Brenda Carol and Susie Lynette. Following the dissolution of this marriage, Robert moved to Chicago met and married Gladys Simmons and her then six-year old son, Tyrone. To this union Dorothy Mae and Swabu Cortez were born. Once the marriage ended, Robert began a 36-year relationship with his domestic partner, Milann Evans, with whom he remained until he took his last breath on Monday, November 22, 2021. Secularly, Robert was an accomplished and highly recognized painter in the steel mill industry, which is what he did until his health would no longer allow him to do so. He was a long-time member of the Elks Lodge in Chicago Heights. This is where he spent time bartending and socializing with fellow lodge members and friends. Friends and family were of the utmost importance to him! Some of the things he enjoyed was the quality time spent in the kitchen with Millie as they prepared meals together, tending to Brenda’s garden and cleaning her fish after an afternoon trip to your the local ponds, cruising around town with Eddie Jr. listening to the blues, his daily phone calls or video chats with Harry, and his anticipation of receiving fresh pecans from Lynette when she would fly in for a visit. Robert will forever be remembered as a fun-loving man with a good heart who will truly be missed by many, but no one will miss him more than his extensive family! Robert was preceded in death by his parents: Cornelius and Emma Jefferson; siblings: Leroy Jefferson, Julius Jefferson, Martha Payne, Frank Jefferson, Franklin Jefferson, William Jefferson, and Lee Edward Mason; former wives: Mary Brown and Gladys Simmons; step-son: Tyrone Simmons; and a very close friend: Sherman Dillard. Robert leaves to cherish his memory, his biological children: Brenda (Eddie Sr.) Johnson, Susie Sanders, Dorothy Jefferson, Swabu Jefferson Sr., and Eboni Joi Perry;; bonus children: Harry (Lisa) Evans Sr., Demetria (Kevin) Keys, and Damon Evans. Nineteen grandchildren: Marico Van Jefferson, Rachunon Fatrice Jenkins, Keshonna Natrice Usher, Eddie Johnson Jr., Breanna Catrice Bell, Ishawna Darri Johnson, Deandra Titanya Jefferson, Ricky Daniel Jefferson, Freddie Levi Jefferson, Swabu Cortez Jefferson Jr., Cortez Swabu Jefferson, Harry Evans Jr., Broderick Evans, Cherie Evans, Jozlinn Evans, Harlon Evans, Taki’la Evans, Donne’tria Hawkins and Domini’que Hawkins; thirty-six great grandchildren, and four great-great grandchildren; six siblings: Blanche Frazier and Louise Davis, Emma Gulyard, Thomas Jefferson, Fletcher Jefferson, and Mary Evans; three sisters-in-law: Mamie Jefferson, Pat Jefferson and Sue Mason; one brother-in-law: Jessie Payne; and a host of nieces, nephews, and dear friends who are all looking for that’s what promised day when “Death Will Be No More”!

On April 14, 1935 in Flora, Mississippi, Cornelius and Emma Sayles Jefferson welcomed their fifth of 14 children into the world&#8230;..Robert Cornelius Jefferson, who was mostly known as R.C. or Bob.   Robert spent his entire childhood in... View Obituary & Service Information

The family of Mr. Robert Jefferson created this Life Tributes page to make it easy to share your memories.

Send flowers to the Jefferson family.