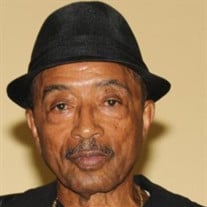 Robert Ellis White was born on February 18, 1942, to Robert White Jr. and Everlyn D. Gladney in Houston, Mississippi. Robert was the oldest of five children. Robert met and later married Janice Kennedy in 1996. Robert was a “Girl Dad” to five amazing girls. He was a terrific father, grandfather, great grandfather, devoted brother, magnificent uncle, and an awesome friend to many. He loved people and wherever he went he was a conversationalist to all he met. Robert attended and graduated from Alcorn State University majoring in Physical Education. After college, he was drafted into the armed forces where he decided to make a career of it, and retired in 1993. As a result, he was affectionately known as Sarge and Uncle Sarge to his many nieces and nephews. Robert began a study of the Bible with Jehovah’s Witnesses, dedicated his life and symbolized his dedication through water baptism becoming one of Jehovah’s Witnesses in 2000. Robert was an avid music lover, and he took pride in his music collection. He was a hard worker and made his career at Provident Hospital, where he retired from after 25 years of dedicated service, and retired in 2013. On April 11, 2022, Robert fell asleep in death. He was preceded in death by his parents and two sisters, Barbara Jean and Annie Ruth. Robert leaves to cherish his memory his loving wife of 25 years Janice; two sisters: Delores Prince (Special Baby sister) of Racine, WI and Carolyn Jean (Jimmy) of Milwaukee, WI; five daughters: Andrea (Vonshay) of St. Cloud, MN, Sheereen of Calumet Park, IL, Ebony (David) of Midlothian, IL. Ashley of Chicago, IL and Symone of Chicago, IL; seven grandchildren: Johnny, Precious, Deangelo, Grant, Bobby, Jaylan and Kennedi (Baby Girl); twenty-four great grandchildren, a very special niece, Debra; and three loving sisters in law: Patricia (Reggie), Debra (Maurice), and Gwen; two devoted brothers in law Omar and Jerry; and a host of nieces, nephews, cousins, and many friends as well as his huge spiritual family.