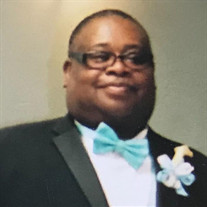 Roderick Cook was born October 5, 1955 to the union of Robert and Ruth Cook. He was the third born out of seven children. Rod attended Hirsch High School where he was Co-Captain of the City and State Championship Basketball team “Hirsch Huskies” 1973. After graduating, he went on to attend Knoxville, Tennessee College and studied Physical Education. Rod then move back to Chicago, Illinois and begin working as a city employee. He later gained employment with Reggio‘s Pizza as a Corporate Salesman and retired 20+ years. Rod married the love of his life, Joann and to this union four girls were formed Shanta, Temeika, Tequita, and Tasha. Rod would attend some Christian meetings with his family. During this time he formed many close bonds with the friends in the congregation. However, he was involved in a work related injury that nearly cost him his life. As he laid in the hospital bed thinking, it was then he realized the need to have a closer relationship with Jehovah. At that time, he began to study the Bible developing his own personal relationship with Jehovah. And October 1990, he publicly symbolize his relationship by water baptism becoming one of Jehovah‘s Witnesses. Rod worked on many different Kingdom Hall projects throughout the loving brotherhood. He was part of the Regional Building Committee (RBC, now known as the LDC). He was also known by the brothers as though “Mud and Concrete Brother”. Rod gave many years of faithful service to Jehovah. Upon taking ill, he was unable to attend meetings. He still utilized every opportunity to witness by way of reciting the books of the Bible and sharing his favorite Bible scripture Psalm 83:18 at every opportunity. Rod was present and included in attendance at his at this last commemoration of the death of Jesus on April 19, 2019, when the loving organization made arrangements for the Memorial to come to his hospital bed in order for him and his family to attend. Rod will be remembered for his humor, always “Taking care of Jo and the girls”. His love of Reggio‘s Butter Crust Pizza, chess, checkers, his many clichés, awesome stepping dance moves, love of Dobb’s hats, stylish dress, his cup of hot tea with no sugar, and also being affectionately known as the “Pizza Man”. Rod fell asleep in death at the University of Chicago Hospital on April 23, 2019, surrounded by his family and loving friends. He was preceded in death by his father Robert Cook; brother Ryane Cook; and son-in-law Aaron Crittenden. Roderick leaves many who will cherish his memories, especially his loving wife Joann Cook; his four daughters Shanta Franklin (Aaron), Temeika “Latrice” Cook-Crittenden, Tequita Cook-Phillips (Charles “Chuck”), and Tasha Cook; five grandchildren Taylin, Saige, Aiden, Ashton, and Shelby; his mother Ruth Buckner; five siblings Ricky Cook (Yolanda), Reginald Cook Reygenna Cook, Rhonda Cook, and Rory Cook; uncle Ralph Cook (Erma); and a host of nieces, nephews, family and friends, and most importantly our worldwide brotherhood. We must not forget his three granddogs Mr. Bentley, Max, and Eboni Myra.

Roderick Cook was born October 5, 1955 to the union of Robert and Ruth Cook. He was the third born out of seven children. Rod attended Hirsch High School where he was Co-Captain of the City and State Championship Basketball team &#8220;Hirsch... View Obituary & Service Information

The family of Roderick Cook created this Life Tributes page to make it easy to share your memories.

Send flowers to the Cook family.