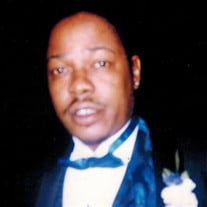 Roger Anthony Nowells was born on February 1, 1965 in Chicago Illinois. He was the eighth child born to the union of Mr. Reid Nowells and Mrs. Lunieal Hill Nowells-Douglass. Through education, he attended Edward Hartigan Thomas, Scanlan, and Throop Elementary Schools then he later went on to Fenger High School. At a young age, Roger studied with Jehovah’s Witnesses but later attended and was baptized as a Baptist. Roger was lovingly given the name Forty oz. by his friends. He loved listening to R&B or stepping to Dusties. He took pride in his grilling. He enjoyed fishing, hunting and chilling with family and friends. He spent his workdays in the hospitality field and was great at it. He was also a handyman, painter and cook. When Forty laughed there was nothing like it. Forty was a gentle compassionate soul. He worked hard and played just as hard. Nothing mattered more to him than family and friends. You could always find him laughing or telling a joke. He was a true believer in having fun. Forty had a warm kind heart and will be greatly missed. On January 19, 2018, Roger departed this life due to failing health. He is preceded in death by his father, Mr. Reid Nowells; his mother, Mrs. Lunieal Hill Nowells-Douglass; his brothers, Lanier Johnny Hill and Michael Maurice Hill; his sister, Marilyn Yvonne Nowells Deberry-Owens; his nephew, James Christopher Hill; his great niece, Tamia Lakia Owens; and his grandparents, Betsy Hill and Steven Hill. Roger leaves to cherish his memories, five siblings, Jerry Nowells, Lamarr Nowells, Gwendolyn Nowells, Delilah Douglass-Palacio and Maria Douglass; his seven children, Tineka Powell, Ramsey James, Jasmine Phillips, Travas James, Sheantha James, Terrell Nowells and Zakala Nowells; eight great grandchildren, nine nieces and 37 great nieces and nephews, and a host of other relatives and friends.

Roger Anthony Nowells was born on February 1, 1965 in Chicago Illinois. He was the eighth child born to the union of Mr. Reid Nowells and Mrs. Lunieal Hill Nowells-Douglass. Through education, he attended Edward Hartigan Thomas, Scanlan, and... View Obituary & Service Information

The family of Roger Anthony Nowells created this Life Tributes page to make it easy to share your memories.

Roger Anthony Nowells was born on February 1, 1965 in Chicago...

Send flowers to the Nowells family.