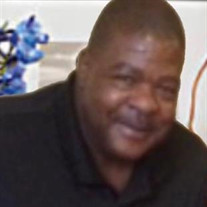 Roland Barber was born November 24, 1956 in Chicago, Illinois to parents Roland Ward Dorothy Barber.   He attended Oakenwald Public School. He loved the city of Chicago and every day after school he went to the lake where he taught himself to swim.   Roland knew from a young age that he wanted to help his community and work for himself.  He started with a food truck and worked his way to owning his own store in the Englewood Terrace. There he was known to be generous! He gave from the heart because he loved people.   He had one child Rolanda, who was the love of his life. Rolanda was named after her father. One of her favorite memories of her dad was him dropping her off, the big hugs and her smiling and waving like crazy as he drove off. He made her spiritual education a priority by teaching her to love Jehovah God. He was extremely proud of all of her accomplishments.  Roland loved his fiancé Deborah very much. Deborah devoted more than 30 years to Roland. She was a very, very special part of his life and a special part of the Barber Family. She loved him very, very much. She will miss him dearly.  On April 24, 2021, Roland fell asleep in death. He was preceded in death by his father Roland, brother Buddy, and sisters Ethel Mae and Willie Mae.    Roland leaves to cherish his memory, his mother: Dorothy; His daughter: Rolanda (Moses); His brothers and sisters: Danny (Joanne), Michael, Cornelius, Pete, Bilbo, Donna, Rita (James), Tracy and Carolyn; He also leaves behind his loving fiancée: Deborah; His children and grandchildren: Chrystal and Christopher; His uncles and aunts: Kenny (Denise), Patricia, Charlene (Jason), Tema and Phyllis; And a host of relatives and friends too numerous to mention.  From Rolanda: Roland had a daughter in January of 1980.  She is his only child and was named after him.   Sometimes he would joke with her and say that he was expecting a boy, but after that he would lovingly tell her that she was better than anything he could have ever hoped for. He went on to teach her how to work on cars and how to open her own business. Most importantly, he instilled in her a love for Jehovah. Some of her fondest memories are of him dropping her off, and before entering the building she would turn around and see him smiling. He was very proud of her many accomplishments. Every time she received some degree, won a award or received some accolade, his chest would  stick out so far that you would swear he was going to bust out of his shirt! He will be greatly missed.  From Deborah:  “I will not hold on to the last moment we had in this system. But I will do like you would always remind me, never look down, keep my head up and hold on to Jehovah. Hope to see you in the new system. Love always, Deborah (and we will make it right).” From his mom Dorothy and his brothers and sisters:  “Roland was the most generous person. He was always there to help. If you needed anything he would always be there no matter what. He would go out of his way to help anyone that needed it. He gave from his heart because he loved people. We will miss him dearly.”

Roland Barber was born November 24, 1956 in Chicago, Illinois to parents Roland Ward Dorothy Barber.   He attended Oakenwald Public School. He loved the city of Chicago and every day after school he went to the lake where he taught himself... View Obituary & Service Information

The family of Mr. Roland Barber created this Life Tributes page to make it easy to share your memories.

Send flowers to the Barber family.