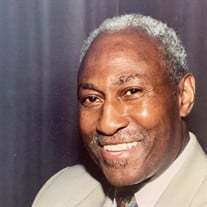 Roosevelt Dorsey was born in Elaine, Arkansas on June 6, 1941 to Richard Dorsey and Charlene Rush. He was the seventh of eleven children, affectionately known as “Sonny” and “Rosey”. He attended school in Elaine, Arkansas with his childhood sweetheart Rannie, whom he affectionately called “Matre”. He later reunited with her in Chicago and they were married on June 23,1962. From this union three precious children were born; Valerie, Danny, and Darrell. Roosevelt was quiet by nature,and you could talk to him freely. He was kind, but firm and ever loving toward his family. He shared in raising his granddaughter, Keandra, until she was 16 years old. He was a great provider, an excellent example of faithfulness. Roosevelt greatly enjoyed cooking and was well known for his dishes. His specialties were barbecue ribs, fried catfish, homemade ice cream, and skillet popcorn for his children. He was an excellent house painter. He enjoyed playing cards, shooting pool and dancing. Roosevelt enjoyed listening to music of singers like Sam Cooke,Gladys Knight & the Pips, and Original Songs on the jw.org website. He loved gardening with his wife, planting collard greens, tomatoes, and the like. He was a gracious host, and enjoyed spending time with his family and friends. Roosevelt from an early age learned to be a hard worker. He was employed at ITT Bell & Gossett along with his brother Percy Dorsey. They carpooled together until Roosevelt retired after 41years. Roosevelt dedicated his life to Jehovah and was baptized on October 5, 1969. He zealously enjoyed participating in the door to door ministry locally and in several unassigned territory campaigns. He conducted many Bible studies assisting others to learn about Jehovah. (Matt 28:19,20). He enjoyed serving as an Elder in the congregation for many years, as well as a Circuit Assembly Cleaning Overseer for many years at Romeoville Assembly Hall. Immediately after retirement, he became a Regular Pioneer and enjoyed the privilege of attending Pioneer Service School on two occasions. Serving Jehovah side by side with his dear wife brought him so much joy. Roosevelt leaves to cherish his memory, his beloved wife Rannie Dorsey, daughter Valerie Dorsey Butler; his sons, Danny L. Dorsey (wife Annette) and Darrell D. Dorsey (wife Karen); two sisters, Vera Mae Boyd and Flotilla Dorsey; one brother, Percy Dorsey (wife Lela); grandchildren Valeah, Gregory II, Keandra, Danny Jr., Shavonda, and Darrell Jr.; great grandchildren Aiyana, Aliyna, Malik, Zariah, Bennie Jr., BreAsia, Breeyonna, and Kamilah; and a host of nieces, nephews, cousins, and dear friends. He is preceded in death by his parents Richard Dorsey and Charlene Rush; and his siblings JC, Lizzie Mae, Jennie Lee, Richard Jr., Willie Mae, Earnestine, and Alsenger.

Roosevelt Dorsey was born in Elaine, Arkansas on June 6, 1941 to Richard Dorsey and Charlene Rush. He was the seventh of eleven children, affectionately known as &#8220;Sonny&#8221; and &#8220;Rosey&#8221;. He attended school in Elaine, Arkansas... View Obituary & Service Information

Send flowers to the Dorsey family.