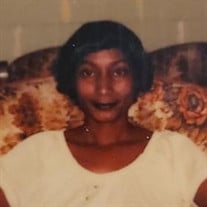 Ruth Burnett Brown was born on August 27, 1945 in West Memphis, Arkansas to the union of Rev. Toney Burnett and Lucy Burnett Hayes. She is preceded in death by her parents and five siblings: Mattie, Nurce, Hiltha, James and Bertha. She received her formal education in West Memphis, Arkansas at Wonder High. She soon became a dedicated Jehovah’s Witness, where she enjoyed talking to others about Jehovah God. She also enjoyed helping people come to an accurate knowledge about Jehovah and His word. Ruth was soon united in marriage to Earnest Brown in 1963. To this union, four children were born: Sharon Brown, Lachelle Brown, Ladelle Brown, and Lovell Brown. Later in 1977, she married Fred Johnson and to this union Jammal Johnson was born. She also later gained two sons: Lonnie Copeland and Erick Elms. After her children grew up, Ruth soon gained employment with the City of Chicago where she was a School Crossing Guard for over 10+ years, then retired. She was a very hard-working woman and did all she could to make sure her family was well taken care of. Ruth was a wonderful mother and house wife who loved raising her children and cooking for her family every morning. She would wake up and cook bacon (“salt pork”), eggs, farina, and salmon croquettes. Ruth also enjoyed eating a good Sunday dinner right after her Sunday meeting. Although Ruth’s health soon declined, she fought a good fightwith the help of Jehovah, and the prayers from all her friends and family. Ruth was in the comfort of her own home when she passed away on June 10, 2020. Ruth has left behind these beautiful family members to live on: Seven children: Sharon Brown, Lachelle Brown, Ladelle Brown (Odessa), Lovell Brown (Donna), Lonnie Copeland, and Erick Elms, all of Chicago, IL as well as Jammal Johnson (Shenyatta) of McDonough, GA. She had seven siblings: Ora Mae Burnett, Delores Burnett, Olivia Burnett, Lincoln Burnett, Luvenia Burnett Hood (Robin) and Dexter Burnett. She also had 23 Grandchildren: Andre, Stefan, Trevell, Mark, Jada, Dhyia, Ashley, Pierre, DeAngelo, Keyontay, Devontae, Ladelle Jr., Cellatee, Joshua, Johnathan, Nathaniel, Christina, Sakeena, Joshua, Jacauri, Jamia, Jasmine, and Jammal Jr. She also had great grandchildren that she loved very much.

Ruth Burnett Brown was born on August 27, 1945 in West Memphis, Arkansas to the union of Rev. Toney Burnett and Lucy Burnett Hayes. She is preceded in death by her parents and five siblings: Mattie, Nurce, Hiltha, James and Bertha. She received... View Obituary & Service Information

The family of Ruth Brown created this Life Tributes page to make it easy to share your memories.

Send flowers to the Brown family.