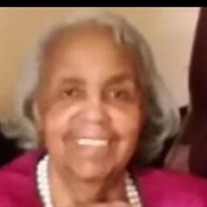 Ruthie J. Rush was born on January 18, 1933 in DeKalb, Mississippi, and passed into the eternal love of God on Monday, April 5, 2021 at the age of 88. A faithful child of God, Ruth devoted her life to sharing the love of Christ with all the lives she touched as a wife, mother, grandmother, daughter, sister and friend. Ruth’s greatest love was her family, and all of her children were proud to call her mom. Despite her large family, Ruth always provided support and made time for everyone.   Ruth was hired in 1970 as an Operating Room Technician at St. James Hospital where she worked until she retired in 1989.  In addition to her formal job, Ruth, a hard worker, also cleaned private homes in her free time to help provide for her family. Mrs. Rush was a dedicated member of the Board of Directors at Cornerstone Community Development Corporation (formerly Ford Heights Community Service Organization). She served as a member of the board for more than thirty-five years taking on leadership roles as fundraising chair, Board President and ultimately as Vice President lending her knowledge and expertise to her successors. In 2019, Mrs. Rush retired from the board and was bestowed the title of Board Member – Emeritus reflecting her respected leadership, wisdom and dedication to Cornerstone. Mrs. Rush was also a long-term member of the Cottage Grove Medical Clinic Advisory Committee bringing much needed medical services to residents of Ford Heights and surrounding communities. In 2007 she played an integral role in the successful fight to keep the clinic open; in the midst of multiple clinics closings throughout Cook County. Mrs. Rush will be remembered as a stalwart member of the organization, and received several awards including the Cornerstone Award during the organization’s 40th year Anniversary celebration, as well as awards from the Village of Ford Heights and the late Mayor Saul Beck for her untiring service. Ruth was proud of the contributions the non-profit organization had made over the years to help improve the quality of life for the residents of Ford Heights, one program at a time. In 1955, she was one of the charter members along with others who assisted Rev. Henry C. Rush in the forming of the Christian Valley Missionary Baptist Church. Over the next sixty (60) years she served in the following capacities: Choir member and President, Sunday school teacher, mid-day bible class teacher, and various administrative positions. Mrs. Rush was ordained as a minister on April 16, 2000, under the leadership of Pastor Odether Bady, Sr. She was a long-time member of Christian Valley Missionary Baptist Church until she later joined the New Hope Community Baptist Church under the leadership of her son, Pastor Wyatt Rush. Evangelist Rush served in various capacities at New Hope, minister, teacher and prayer leader. Ruth was predeceased by and joins in heaven her husband Decell and children, Deborah, Linda, Jacqueline, Pete and son-in-law Odether Bady. Other family members that preceded her in death were her parents, Sally and Avery Rush, three brothers, Walter Rush, Wyatt and Charlie Jennings (Muzella) and one sister Gussie Rush (Rev. Henry C. Rush.) Mrs. Rush is survived by her children Gloria Weekley (Tyrone), Leoria Rush-Bady, Elder Charles Rush (Cherryce) and Pastor Wyatt Rush (LaTeyce), a brother Welton Michael Rush (DeKalb, MS), and a host of grandchildren and great grandchildren, as well as other relatives and friends. Ruth’s love for God, family and her role as mother and grandmother were the most important things to her. Family is where she drew her strength and left her legacy. Being with her family was what Ruth enjoyed most of all. Ruth was kind and loving and mothered everyone, so much so that her children’s friends would often call her mom. She took this as a compliment and never shied away from providing support for others in one way or another.   As her children, we are thankful to have been raised by our mother who was the most incredible role model and taught us to always be ourselves and to push ourselves to learn more. She taught us to have strength and to believe in ourselves. We will miss her smile, her laugh, her sage advice, and her personality.   Thank you for being here today to honor her memory. She loved all of you and her memory will live on in all of us!

Ruthie J. Rush was born on January 18, 1933 in DeKalb, Mississippi, and passed into the eternal love of God on Monday, April 5, 2021 at the age of 88. A faithful child of God, Ruth devoted her life to sharing the love of Christ with all the... View Obituary & Service Information

The family of Mrs. Ruthie J. Rush created this Life Tributes page to make it easy to share your memories.

Send flowers to the Rush family.