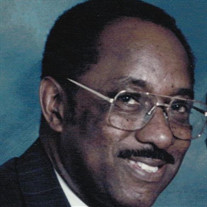 Sam Henry Athalone was born May 9, 1939 to Henry and Elnora Athalone in Sunflower County Mississippi. He moved to Chicago, Illinois in 1956 where he graduated from Wendell Phillips High School in 1958. Sam served in the US Army January 1963 - December 1964. Sam married Mary Hargrove in July 1964. Sam always liked cars and began working for Ford Motor Company in 1969. An accident that damaged his right foot and ankle, forced him to retire from his job as an inspector after 38 years of service. Sam was always known to have a warm, friendly spirit. Upon his retirement, his workmates asked his children who were present "if he was always like that?" They commented that "even if you see him a few times a day, every time he sees you he speaks as if it is the first time". Sam truly loved people and good conversation. If you ever felt down or invisible, his genuine greeting and laughter could light up your day. In 1968, Sam began studying the Bible with Jehovah's Witnesses and in 19l69, dedicated his life and symbolized it by baptism. Over the years he continued to develop a reputation as a loving and kind shepherd, willing to give of himself and put the needs of others ahead of his own. On many occasions he would receive a phone call, put on a suit and tie and go take care of someone in need. Even if late at night he would always answer the phone. Over the years he assisted many to come to a better understanding of scripture, teaching not only in word but by example. He was always welcoming, treating everyone, especially his children's friends as part of the family. Sam's priorities were his family and ministry. Once asked why he stayed at a very hard job that he didn't like, he responded "It allowed him to take care of his family and didn't interfere with his ministry". It was funny that despite working in a factory, many of the children in the neighborhood thought he was a teacher because he was always seen in a suit. Despite having to endure dialysis, pneumonia and heart surgery, he was always a joy to be around. After coming home from the hospital, Friday, December 4, and seeing his wife of 56 years, he lay down for the night and continues to sleep. He now awaits the call of the one who can awaken him. (John 5:28,29) Sam was preceded in death by his father Henry Athalone 1995 and sister Luevnia Pickett April 2020. He is survived by his mother Elnora Athalone; spouse Mary Athalone; children Sametta Athalone, Pamela Rainey (Tommy), Patricia Harris (Tony) and Michael Athalone (Latanya); grandchildren Cameron Patterson, Rachel Rainey, Jennifer Patterson, Christopher Rainey and Thomas Rainey; sisters Edna, Rosie, Daisy, Martha and Denise; along with a host of other family and friends.

Sam Henry Athalone was born May 9, 1939 to Henry and Elnora Athalone in Sunflower County Mississippi. He moved to Chicago, Illinois in 1956 where he graduated from Wendell Phillips High School in 1958. Sam served in the US Army January 1963... View Obituary & Service Information

Sam Henry Athalone was born May 9, 1939 to Henry and Elnora Athalone...

Send flowers to the Athalone family.