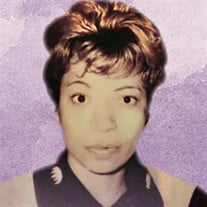 Sarah Francis Robinson was born on August 20, 1924, to the union of Mac Stovall and Sally Stoval, whom both proceeded her in death. To this union four children were born, her sister’s Barbara, Azele, Justine and her brother Mac whom all proceeded her in death. Sarah married the love of her life Edward Robinson on September 29, 1941, and they were happily married for 63 years until her husbands passing on February 2, 2004. To this union 7 children were born, Doris Robinson, Mary L. Knight, Lamont Robinson, Edward Mac Robinson, Michael Robinson, and Adair Robinson Sr. all whom proceeded her in death. Sarah had four grandchildren Davonna, Edward, Sherri, Eric and two great grandchildren Autumn and Korterri whom also proceeded her in death. Sarah spent her early childhood years living on the family farm in Toccoa, Georgia. After Sarah and Edward were married they migrated to Chicago, Illinois and settled in their residence located at 616 E 43rd and began raising their family through education, music and became active in church services. They moved to 1525 W. 14th St. where they attended church services at 1st Emmanuel Lutheran Church. After a few years they relocated to 120 E. 25th St. and it was there that she started her career at Premium Plastics Inc. and after many years of employment she celebrated her retirement with family and friends. Sarah and Edward purchased their family home located at 420 W. 98th St. in 1965. They were rooted in their community and they were well known and engaged as a respectable family that became involved in the activities of their children and they formed lasting ties with their neighbors in the 98th St. community and they formed a close bond with their long time neighbors the Ashmore’s. Sarah loved gardening, fishing, cooking and maintaining her faith. She spent many years enjoying great times with her husband traveling in their boat to fish with family and friends. Sarah loved the time she spent with her grandchildren and she was meticulous about telling stories of her childhood and the adventures she had growing up. Sarah was wise, funny and had a no nonsense personality. Sarah was the epitome of strength and resilience and she was determined to be as independent as she could even while facing medical challenges. She would express her gratitude to her son Robert who consistently cared for her and ensured that she had what she needed at any cost. On August 17, 2002, Sarah was baptized as one of Jehovah’s Witnesses. Her meetings and sharing Bible truths was always her first priority. She believed in the hope of resurrection promised in John 5:28, 29. She remained faithful to her God for 19.5 years until her passing on February 20, 2022 at 1:30am at the Prairie Oasis Nursing Home in Country Club Hills, IL. Sarah leaves to cherish her memories: Her sole surviving son Robert D. Robinson, Twenty Grandchildren, 46 Great Grandchildren, 11 Great, Great Grandchildren,  son-in-law Carlton Knight, A host of Neices ,Nephews, Cousins, Her 98th Street Family and her Faith Family of Brothers and Sisters from the Jehovah Witness Hall especially her dear friends Ms. Ella and Ms. Essie.

Sarah Francis Robinson was born on August 20, 1924, to the union of Mac Stovall and Sally Stoval, whom both proceeded her in death. To this union four children were born, her sister&#8217;s Barbara, Azele, Justine and her brother Mac whom all... View Obituary & Service Information

The family of Mrs. Sarah Francis Robinson created this Life Tributes page to make it easy to share your memories.

Send flowers to the Robinson family.