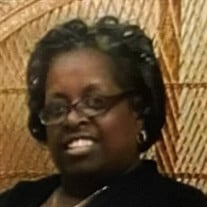 Sharon Renette Brooks, affectionately known as “Sherry”, was born on January 30th, 1959, in Chicago, Illinois. She accepted Christ at an early age and was a devout Christian. She was a long-time member of 1st Bethel, where she worshipped until her health failed. She graduated from Paul Robeson High School. Worked at different organizations where she received various certifications. She later attended Harold Washington College to expand her knowledge. Sherry was employed for many years as a drug and alcohol abuse counselor. Later in life, she served seniors throughout the city as a home health aid. You see, Sherry was always known for caring for someone - it was simply in her. Being a “Grandma” was her ultimate honor! She loved each and every one of her grand and great grandchildren and looked after them as if they were her very own children. Her affection for family is what drew all the neighborhood kids to her home, once there... they never wanted to leave her side. Sherry had a real love for dressing sharp...matching from head to toe! She would often say her best outfit is the one in her brain, cause for her, attitude was everything! She loved to take that attitude on the dance floor and “step” until she sweat her fro out. She also enjoyed music; in fact her house was the place to be when she lived in the Abla homes. Feeding kids, playing music and doing hair kept her doors swinging open. Young men and women flocked to her to stoop to learn how to care for themselves and their families as she schooled them on life. She was open about her experiences and how things shaped her reality. Being real is what everyone that knew her-loved about her. Speaking of love, Sherry was known for her cooking. When it came to family gatherings, it was definitely going to be at her place. She put a-lot of love and time in every dish she made, especially her chocolate cakes. Anyone who ever ate her food: either fell asleep afterwards, left with a big ‘Kool-Aid’ smile, or was carrying a few bags...cause she certainly made sure you had a couple of plates. Her time here was cut short but certainly well spent. She is preceded in death by her mother, grandson, sister-in-law, her aunts, and uncle.

Sharon Renette Brooks, affectionately known as &#8220;Sherry&#8221;, was born on January 30th, 1959, in Chicago, Illinois. She accepted Christ at an early age and was a devout Christian. She was a long-time member of 1st Bethel, where she... View Obituary & Service Information

The family of Ms. Sharon Brooks created this Life Tributes page to make it easy to share your memories.

Send flowers to the Brooks family.