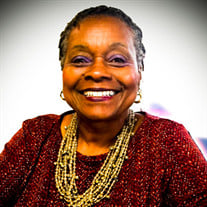 Sharron Anthony was born January 6, 1947 in Chicago, Illinois. She graduated from Harlan High School, where she also attended the Licensed Practical Nursing program. Her father tried to convince her to become an RN, was even willing to pay for the extra schooling, but she declined. By then, she had come in contact with Jehovah’s Witnesses and wanted to pursue a life-saving career of preaching the good news of God’s kingdom. She studied the Bible and soon dedicated her life to Jehovah and got baptized April 14, 1974.   It wasn’t long before Sharron’s love for Jehovah and for people moved her to do more in his service. She began full time pioneer service in December of 1976 and never stopped, spending 45 years helping people learn about Jehovah, and assisting several students to make the truth their own. To support herself, she worked at various hospitals on Chicago’s south side, including Michael Reese, Mercy, Doctor’s Hospital, South Shore, and LaRabida Children’s Hospital, where she eventually retired.   Sharron was zealous for the preaching work and was always excited for a new service year. She would meticulously plan her schedule and share it with her friends. And of course, she would always look for partners to work with from various congregations. Her zealous spirit was contagious, and she always found someone to work with morning, afternoon and evening.   While Sharron may not have had any blood relatives that shared her faith, she was truly an example of what is stated in Mark 10:29, 30. She was blessed with a huge spiritual family of brothers, sisters, children, and grandchildren. She also had the privilege of attending pioneer service school several times and was blessed to be able to attend International and Special Conventions in Frankfort Germany, San Juan Puerto Rico, and Mexico City Mexico. Even when she was not in the field ministry, she was still always on the go. She loved going to the zoo, spending time with her “children,” and she loved to shop. She may not have been rich, but she still liked to splurge every so often - especially on purses, shoes and jewelry. She also travelled whenever she could to see her friends in the Dominican Republic, Missouri, Georgia, and other places.   Her parents, as well as her sister preceded her in death. Left to cherish her memories are all of those who make up her spiritual family and friends, who look forward to seeing her again in paradise.

Sharron Anthony was born January 6, 1947 in Chicago, Illinois. She graduated from Harlan High School, where she also attended the Licensed Practical Nursing program. Her father tried to convince her to become an RN, was even willing to pay... View Obituary & Service Information

Send flowers to the Anthony family.