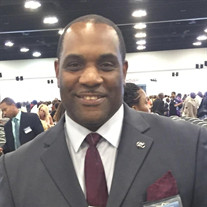 On May 27, 1967, Sylvia and Mose Whitaker Jr. (Christine) welcomed a beautiful baby boy they named Sheldon Bryant Whitaker. Sheldon’s intelligence, confidence, charm, wit and natural athletic ability shined through in everything that he did. He was a man who knew who he was and exactly what he wanted to do. As a student at Avalon Park Elementary School, Dunbar Vocational High School and Lincoln Technical College, Sheldon excelled in academics. Always a leader and at the top of his class, his ability to analyze and retain information was a gift and a strength. His strengths and leadership abilities allowed him to serve as an Area Field Manager for U-Haul, where he had a 27 year career. Sheldon had a special relationship with his father that any onlooker could see and think that they were brothers. Their love, mutual respect and admiration for each other fostered a bond that was strong and unwavering. Sheldon first found love with Stephanie Starks and on August 16, 1990, they were married. Excited to start a family, he became a loving father to three wonderful children; Jeffrey, Sheldon Jr. (Monica) and Jerne’. For each of his children, he held a special place of love in his heart. He instilled in his children his love of basketball, his sense of responsibility, and his ethic of hard work and endurance. The light of his life were his three grandchildren; Charlee, Maxx and Sheldon III. Sheldon always shared stories about how they were growing and the many shenanigans they were up to. To his siblings; Lisa (Leonard), Sheila (Michael), Sherwin (Sarah), Sherrie, Shonda and Sharon he was the best big brother anyone could have asked for. He was an advisor, a loving and caring supporter, a protector and a best friend. Each of his siblings had their own unique and special relationship with him. To his nephews and nieces; Ivan, Caleb, Jordan, Monique, Shannelle, Candace, Sylvia, Monica, Synthia, Montell and Mariah, he was affectionally known as “Uncle Guy Guy”. Sheldon’s stepmother, four step sisters and step brother all adored him. On August 2, 2008, Sheldon dedicated his life to Jehovah God and served in the Christian Congregation as a Ministerial Servant. Sheldon was proud and happy to serve the congregation and enjoyed the many friendships he developed. One of the happiest days of Sheldon’s life was when he found love again. He was introduced to Amaryllis Perelez and he knew right away that she was the one that he wanted to spend the rest of his life with. On July 22, 2017, Sheldon and Amaryllis were joined together in marriage. Sheldon loved Cadillac cars, playing jokes on people, talking about stories of the past, listening to old school music, going to basketball or baseball games, sharing his wisdom and encouraging others. Sheldon’s warm smile and positive energy was a magnet that drew people in and helped him to build lasting friendships. Friendships he maintained for many, many years. A son, a husband, a father, a grandfather, a brother, an uncle, a nephew, a cousin, a friend…that is Sheldon Bryant Whitaker, Sr.

The family of Sheldon Bryant Whitaker created this Life Tributes page to make it easy to share your memories.

Send flowers to the Whitaker family.