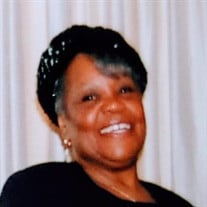 Shirley was born April 27, 1940 Greenville, South Carolina to parents Arthur W. Wright and Nora Durham Singleton Wright. When just a toddler, her family moved to Chicago, Illinois where she was raised and schooled. She graduated from Phillips High School and went on to college to receive her Bachelors Degree from Northeastern Illinois University. Shirley married her high school sweetheart and forever love, Walter White. Shirley was a genuinely loving, caring and generous person who enjoyed the company of children and adults alike. She worked and served her community in various roles as a Girl Scout Leader, Insurance Agent, Union Steward, and Human Services Counselor for adults and teens. She also valued her time spent managing a preschool and an adult vocational program. Her love for people and desire to be of help to them led her to dedicate her life to serving them as one of Jehovah’s Witnesses. She was baptized on June 25, 2005. Because of her desire to assist her neighbors to learn about God and how that knowledge could improve their lives, Shirley began serving as a full-time (pioneer) minister September 1, 2010, attending Pioneer School in 2011 and 2016. She remained a faithful servant of Jehovah until her death on Saturday, December 27, 2019. Aunt Shirley, as she was affectionately called by family and friends, was a wonderful wife, mother, grandmother, great-grandmother, sister, aunt, and a special friend to many. She was known for always being “decked out” in her attire, whether at the meetings, in the ministry, at work, or with family. Shirley was a “Real Lady”, always courteous and respectful, while at the same time knowing how to enjoy herself and entertain others; someone all wanted to emulate. Preceding Shirley in death were her parents Arthur and Nora; brothers Bob and Billy; and sisters Elizabeth, Eunice, Willie, and Dorothy. Shirley leaves to cherish her memory, her husband Walter; sons Cortez, Bobby, Edward, Maurice, and Elmer; daughters Rosemary, Leontine, and Shirley; sister Norma Jean; nieces Karen, Phyllis, Donna, Maria, and Stalina; grandson Kendall; great grandchildren Kaaliyah, Isabel, and Kendall Jr.; great nieces and nephews; and a host of adopted family members and friends.

Shirley was born April 27, 1940 Greenville, South Carolina to parents Arthur W. Wright and Nora Durham Singleton Wright. When just a toddler, her family moved to Chicago, Illinois where she was raised and schooled. She graduated from Phillips... View Obituary & Service Information

The family of Shirley White created this Life Tributes page to make it easy to share your memories.