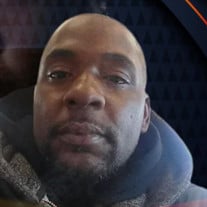 Steven Tyreese Shaun Allen “Tyreese” was born on April 14th, 1982 to the union of Booker and Sharon Allen. He was raised in Sauk Village, Illinois by his Mother Sharon and Stepfather Felipe Marrow who affectionally gave him the nickname “Burns” based off their favorite character from The Simpsons. He received his formal education through School Districts 168 and 206. He attended the Kingdom Hall of Jehovah’s Witnesses as a child and had a love for electrical engineering and music. His favorite songs were “Can You Stand the Rain” by New Edition and “I Ain’t Mad at Cha” by Tupac. On any given day when walking into the house you would certainly hear one of these songs played multiple times if not both. Tyreese was an exceedingly kind and compassionate individual and was always very respectful to his aunts and uncles. He also shared an incredibly special relationship with his nieces and nephews. His nieces literally had him wrapped around their fingers. Tyreese also had a love for landscaping and could always be called upon when his mother and siblings needed yard work done. Tyreese is proceeded in death by his biological father Booker T. Allen, stepfather Felipe Marrow, his brothers Bobby Allen, and Booker T. Allen Jr., his maternal grandparents Matt and Francis Simpson, his paternal grandparents Booker T. Harris and Mable Allen and two maternal uncles Aubrey Simpson Sr. and Matt Simpson Jr. He leaves to cherish his memory, his mother Sharon Marrow; nine brothers Reco Simpson, Lenard (Talisa) Allen, Jaburee Simpson, Marv’a Simpson, Bryan (LaToya) Allen Sr., Brandon (Raamah) Allen, Donte, Antoine Berry, and Bernard Allen; five sisters Shalonda (Labriyone) Simpson-Meadows, Brittaney Allen, Bridgette Allen, BreAnn Jones and Charity Scruggs; special maternal aunts Barbara Robinson and Eileen Lewis and a special cousin James Lewis. As well as maternal aunts Alma, Eilane, Patricia, Carla paternal aunts Carolyn, Stephanie and maternal uncles William, Marvin, Kenneth, Mike, Steve, and Karl. As well as a host of cousins and friends.

Steven Tyreese Shaun Allen &#8220;Tyreese&#8221; was born on April 14th, 1982 to the union of Booker and Sharon Allen. He was raised in Sauk Village, Illinois by his Mother Sharon and Stepfather Felipe Marrow who affectionally gave him the nickname... View Obituary & Service Information

The family of Mr. Steven Tyreese Shaun Allen created this Life Tributes page to make it easy to share your memories.

Send flowers to the Allen family.