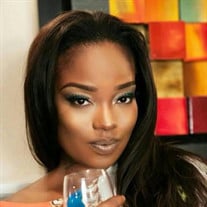 TAIJÍTÉ KUUMBA KELAN EL’S (GRAVES/ COHRAN) birth story was unique as her umbilical cord was prolapsed, meaning it had dropped into the birth canal preceding the “normal” head first presentation. This was extremely dangerous especially for the intended home birth. Aquilla Sadallah (Graves), her birth mother, whom she called “Mama” and Maia, her bonus mother who was also the chief lay-midwife at her birth, whom she called “Ima” (eeMah), were set in motion as a trilogy bond of feminine force with yet born Taijíté. The prolapsed chord made it necessary to switch plans and make a quick transport to Roseland Community Hospital, Chicago, IL for an emergency C-section. Her father, Kelan Phil Cohran*, second lay-midwife: Mekazin Alexander and Maia carefully maneuvered Aquila down two flights of stairs and into the car. The Creator of the Universe granted this gorgeous baby girl with a beautiful soul, safe delivery into this earthly life and into our family at sunrise, December 31, 1987. Taijíté’s life was already marked for enigmatical existence, which is why the detail of her birth story is so important. She was born curious, fearless, regal, spiritually sensitive and obviously had “been here before.” Funny story: It was noticed that when Bro. Phil would enter a room without acknowledging her personally, she would grab his face and clutch her tiny finger nails into his skin as soon as he got close enough to her to do so. Taijíté would not let his face go until he’d kiss and speak to her. This happened several times before he finally realized that she was orchestrating a personal acknowledgment. So, Bro. Phil obliged her gesture with purposely stopping to speak her name and give her a kiss from that day on. Taijíté responded by patting his cheek as if to say, “Well done.” Mind you, this behavior was reserved specifically for him as their bond was undeniably sealed. Tay’s formal education began at Ysrael Of God Academy in Chicago. However, part of her upbringing happened with her aunt Margaretta* (Graves), along with her younger brother Wali and her beloved cousins in Joliet, Il. Taijíté attended Dirksen Junior High and Joliet Central High School. She confided in Wali that aunt Margaretta influenced her most as Taijíté’s perspective on perseverance was set with her aunt’s example of thriving though being gravely ill. Taijíté loved her family, and spoke fondly of the childhood in Joliet. She moved back to Chicago and attended Harper High School along side her mother, Aquilla who was a teacher there. Her more recent educational endeavors culminated with extensive studies in massage therapy and herbalism. Being born into a musical legacy, she was predestined to learn to play the violin before she turned 7 years old. Innately gifted as a dancer, she studied and performed with Danny Diallo Hinds’ Sundance Dance Company and Minianka Afrikan Drum and Dance Ensemble with Nahgeree Sutton* and Meshach Silas*. However, her dance dream was fulfilled as she was given the opportunity to dance with her father’s Solstice Concert at Jay Pritzker Pavilion at Millennium Park in 2016. Tay was a dedicated mother of six children and community activist who obviously wore many hats as an entrepreneur, performer and healer that was continuously reinventing her approach to providing a service to people. Currently, she worked as Manager and Hair Stylist at Madeline’s African Hair Braiding Salon. Tay inherited hair talents from her mama, Aquilla. She was a member of The Moorish Science Temple Of America Temple #1 and Moya Cultural Arts. She’d also worked as an Administrative Assistant at Computer Systems Institute, earned certification at Pacific College of Oriental Medicine (PCOM) and developed techniques in Kemetic Health Weaving. Taijíté was a voracious reader and was passionate about her children’s education. She loved to play Scrabble and was particularly stylish with her (African) wardrobe and numerous hairdos. Tay approached life with an uncanny individuality with intension on many levels. We SALUTE your life, dear one and pray that Thee Almighty Creator’s Grace will cover all of your desires for your/our children. You lived completely. We miss you already. You are forever in our hearts. “I have jam packed journals from when I was 12. I love how my paper listens to my pen without interruption or judgement. Writing is therapeutic for me. Now to be able to write a book that I'm willing to publish is uncharted water, but I'm fearless. I have no shame in my game and I don't mind sharing myself with others....this is a big step for me... Just to be able to ramble on about anything, then come back to it and make sense of it all is why I need it in my life. lol” — quote by Taijíté Kuumba Kelan El Taijíté leaves to mourn her passing six children: Elektra, Amri, Amrita, Michael, Memphis and Syidah; two mothers: Aquilla Sadallah and Maia; aunts: Marsha and Trista Graves; sisters: Azaziah, Auriga, Makeda, Ramila, Penta, Lyra; brothers: Gabriel, Saiph, Amal, Jafar, Uttama, Seba, Tarik, Wali, Ani, Mushallah, Tycho, Cephus, Malik, Sirami; niece: Ceresa; nephews: Arnum, Akerele “MilHoy” (Tyfanny); cousins: Chelsea, Ranisah, Franklin, Antoinette, Sherron, Nkrumah, Tameka, JJ, Tyrrell; her beloved companion: Christopher Ivy; god-mother: Yaya Sharion and a host of other extended family, friends and hair clients.

The family of Taijite Kuumba Kelan El created this Life Tributes page to make it easy to share your memories.