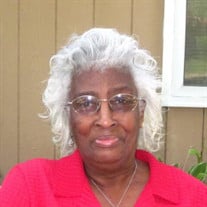 Thelma Johnson was born November 23, 1928 in Lineville, Alabama. She was born an identical twin and blessed the union of Mattie and William M. Ross. Thelma received her formal education in Alabama. In 1957, as a young woman, Thelma moved her family to Chicago, Illinois. In 1961, the family moved to East Chicago Heights, Illinois. Thelma married and together they had 6 children and they considered each to be a special gift from God. Thelma was a woman of God, she joined Progressive Missionary Baptist Church, upon moving to East Chicago Heights. She joined New Beginnings Baptist Church under the leadership of Dr. Constance Shorter. Her faithfulness to God included her service in the church as a mother of the church and a missionary of the church. Thelma was a woman who believed hard work was its own reward. She retired after many years of service at St. James Hospital in the dietary department. Not being one to sit still she then began working at Holiday Inn in Matteson, Illinois. One of her greatest joys was family and caring for them was her life’s work. Her children would tell you of the many family dinners and holidays where your favorite dish would just appear on the table. Ms. Johnson as she was known in the neighborhood was loved for her kind smile and warm hugs. On August 18, 2018 at 12:45 a.m., surrounded by her loving family, Ms. Thelma Johnson heard the Lord call her name and she rested from her labors. She was preceded in death by her mother and father, siblings Willie J., Albert Frank, twin sister Velma, Edward, her oldest son Huey Jr., and two granddaughters Andrea, Keisha. Thelma leaves to cherish her memory and continue her legacy, her children Thelma (C.W.) Edwards, John (Barbara) Johnson, Susan (Alton) Jonson-Riley, Diann Reed, and Cory Wayne (Teresa) Johnson; daughters-in-law Pat Johnson and Sandra Jordan; 17 grandchildren, 43 great grandchildren, 27 great-great children, and a host of nieces, nephews, cousins and friends that were close as family Lena Peoples, Athesteen Thompson, Dorothy Kirkland and Essie Camp.

Thelma Johnson was born November 23, 1928 in Lineville, Alabama. She was born an identical twin and blessed the union of Mattie and William M. Ross. Thelma received her formal education in Alabama. In 1957, as a young woman, Thelma moved her... View Obituary & Service Information

The family of Thelma Johnson created this Life Tributes page to make it easy to share your memories.