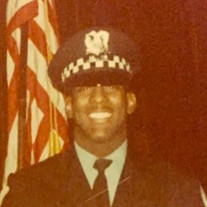 Tranondus Cook affectionately known as T.C., was born on September 13th, 1959 in Chicago, Illinois to Nelson and Josephine Cook. He was the third of four children born to this union. T.C. attended Countee Cullen Grammer School and was the first graduating class at Corliss High School. He later went on to attend Chicago State University and in 1982, he became a member of Kappa Alpha Psi. Fraternity Inc. (Theta Zeta Chapter), where he later served as the president of his chapter. In that same year he graduated from Chicago State University earning his Bachelor’s Degree. T.C. was employed as a Bus Driver with the Chicago Transit Authority where he worked for several years, until becoming a Police Officer (District 22 & District 1) with the Chicago Police Department. He worked in this capacity for 30 years until retiring in 2017. T.C. was a very committed and diligent worker who had an unmatched work ethic. He often took side jobs working security on his off days. T.C. married Karen Momon on July 17th, 1993 and to this union two daughters, Jasmine Marie, and Kelly Nicole were born. T.C. was a driven professional and consummate businessman. He was an Independent Car Dealer and the Proprietor of several properties. In his free time, he loved watching Judge Mathis and playing Monopoly with his family. If you knew T.C., you would know that he loved his family and that education was very significant and valued by him. He had a big heart and because of that big heart he was loved by everyone. He genuinely wanted to see everyone succeed. God called T.C. home from labor to rest on February 24th, 2020. T.C. was preceded in death by his father, Nelson Cook Sr., mother Josephine Cook, and brother Michael Cook. He leaves to cherish and honor his memory: His loving daughters, Jasmine Cook and Kelly Cook; Two brothers, Nelson Cook Jr. (Geri) and Darnell Cook (Irene); His Loving companion, Angel; Nephews and Nieces, Nelson, Nicholas, Peggy, Kirsten, Kennedy, and Olivia and a host of family and friends.

Tranondus Cook affectionately known as T.C., was born on September 13th, 1959 in Chicago, Illinois to Nelson and Josephine Cook. He was the third of four children born to this union. T.C. attended Countee Cullen Grammer School and was the first... View Obituary & Service Information

The family of Trandondus Cook created this Life Tributes page to make it easy to share your memories.

Tranondus Cook affectionately known as T.C., was born on September...

Send flowers to the Cook family.