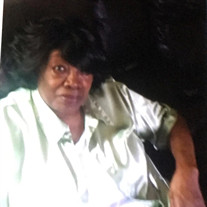 ZOOM ID: 401 144 6308 PASSWORD: 037677 Velma Parker Chapman was born to Freeman Parker and Johnnie (Wilbourn) Parker on Tuesday, September 5, 1939 in Sumner, Georgia. Velma was the youngest daughter of 14 children. She was best known for the generosity she showed family and friends. She often provided shelter to those in need and gave to the Cancer Society and other charities. You never felt alone if she was in your life. Young Velma was vivacious and smart. She had a love for learning and a love for children. As such, she was the first in her family to graduate from college. She completed her bachelor’s at Albany State College in Albany, GA and later completed her master’s at Roosevelt University in Chicago, Illinois. She started her career teaching Business Education at Farragut High School in Chicago, IL, but her love for children led her to Herzl Elementary School where she dedicated 33 years to teaching first graders for Chicago Public Schools until her retirement at age 55. She was beloved by her students whom she often brought home for weekend visits and whom often returned to Herzl to visit her long after they graduated. Velma married Liston Bradley on April 5, 1964. They added a daughter, Tonya, to the pairing in 1965 and another daughter, Karen, in 1968. The marriage ended, but the two remained friends as they co-parented their two children. After a careful study of the Bible, Velma dedicated her life to serving Jehovah God. She symbolized this dedication through water baptism becoming one of Jehovah’s Witnesses on October 19, 1974. Later she met and married Eugene Chapman and they remained married for the remainder of his life. She continued to strengthen her faith and commitment through the remainder of her life. Velma’s life came to a close on Thursday, April 23, 2020 at the age of 80. She was preceded In death by her parents and siblings William, Freeman, John, Robert, Hugh Lester, Wesley, Royleen, Walter Mae, Alma, Ella Belle, Ruth, and Sylvia. Her brother Gordon survived her by a few weeks. She is survived by her children Tonya Bradley Thomas and Karen Bradley Ajayi who remember her fondly as the supermom who made them fancy outfits, crocheted them hats and scarfs, picked and canned vegetables, caught the fish prepared at the fish fry, whipped up home cooked meals every night complete with her famous 7-Up pound cake and still she had time to fix scraped knees with a kiss and read them bedtime stories. She made sure her children were cultured taking them to museums, plays, and historical landmarks; encouraged participation in the arts; and often travelled with them so they could see the world. She also leaves fond memories with five grandchildren Brandon, Candace, Cassandra, Christina and Rebecca, nine great-grandchildren, and a host of nieces, nephews, cousins and friends.

The family of Velma Chapman created this Life Tributes page to make it easy to share your memories.

Send flowers to the Chapman family.