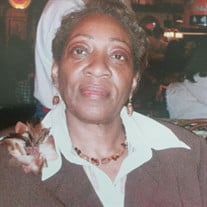 Verleane McMiller, also known as MS Butterfly, was born in Gilmore, Arkansas on November 19, 1943, to Alma and Archie Harris, Sr. Verleane moved to Chicago, Illinois in 1953, and attend Drake Elementary School and Phillips High School. Verleane worked as a CNA, homemaker and met Limmie McMiller in 1959, and married in 1963. They had five children together. Verleane took her job as Parent very seriously being a Fierce Protector and supporter of her children until the very end. She made friends easily, bringing smiles to the faces of whomever she met. She always left a kind impression. Verleane was known for loving-kindness, warmth, generosity, great sense of humor and wit. She loved making people laugh and happy, especially, her seven grandchildren. She would do anything for them and often did. All it took was a phone call or simple text message from either of them or she made sure their requests were met. Verleane enjoyed cooking and feeding her family and friends. She was very good at both. Early in her life, Verleane manifested faith in a creator. In fact, Verleane and sister Margaret would attend different churches on Sunday’s searching for what the Bible calls the Truth! After the Tragic death of her brother, Verleane and her sister and they encountered a Jehovah's Witness name Vivian Poole. They were drawn to God’s Promise of the Resurrection hope of dead loved ones. Verleane and her sister Margaret, both dedicated their lives to Jehovah by getting baptized. Margaret was baptized in 1973 and Verleane in following year 1974. Verleane, served Jehovah faithfully for 47 years, preaching and teaching about God’s kingdom utilizing JW.org to the very end. On Monday December 13, 2021, Verleane fell asleep in death much too soon….. a devastating loss to all who were privileged to have known her. She was preceded in death by her parents, a sister Annie Bea, and brothers Archie Jr. and Walter Lee Harris and a daughter-in-law Desiree Harris. She leaves to cherish her memory, loving husband: Limmie McMiller; five children: Terry Harris, Pamela McMiller, Darrin McMiller, Sherrie LaShawn McMiller, and Kimberly McMiller-Chavours (Hollis Chavours); daughter-in-law: Dorothy Harris; son-in-law: Arron Vaughn; one sister: Margaret Hill; two sisters-in-law: Christine Vaughn and Desma Chavours; seven grandchildren: Terrance Harris, Darrin Jr., Jasmine Harris, Brandon McMiller, Jada Mitchell, Devin McMiller, and Kaylin McMiller; three great grandchildren: Tayvon, Javion, and Tamari; two great-great grandchildren: Kamari and Mesiah; and friends and more family too numerous to name and number. She will be truly missed.

Send flowers to the McMiller family.