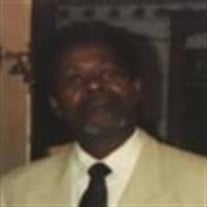 WILL EARNEST JOHNSON nicknamed “Bozo”, a name given by his daddy, was born on March 1, 1946 to Earnest Johnson and Louella Bloomingberg-Johnson. WILL EARNEST JOHNSON accepted Christ into his life at a early age, and was baptized at White Star Baptist Church, in Boyle, Mississippi. Later in life, he joined First Holy Church, under the leadership of Pastor Robert Williams. WILL EARNEST JOHNSON attended HM Naylor in Cleveland, Mississippi for his early education and received his High School Education Diploma through US AFI. WILL EARNEST JOHNSON joined the Navy-USN, March 10, 1965 - January 29, 1969, where he received the National Defense Service Medal. WILL EARNEST JOHNSON “BoZo” mom passed away during his early childhood years and he began to cling to his older sister Lorene (as a mother figure), where he called her “Sister”. After his completion of the Navy and coming to Chicago, there were days when “Sister” had no idea where he was but he always knew how to find “Sister”, and when months went by and no one had heard from him, his older Brothers “ Clarence & Earlie” would take a ride. WILL EARNEST JOHNSON the musician, the song writer, the singer, who was very passionate and very protective of all three. He was part of the music ministry at First Holy Baptist Church, where on one occasion he gave a rendition of one of his written pieces where he asked before beginning that there would be no recording. What he didn’t know, was that his nieces and nephews never forget anything. WILL EARNEST JOHNSON was preceded in death by his father: Earnest Johnson; his mother: Louella Bloomingberg-Johnson; sisters: Louizer Jackson and Katie Mae Green; sister-in-law: Doretha Johnson; brother-in-law: James Jackson; nieces: Brenda Williams-Knight, Paulette Green and Khadijah McElrath-Bey; nephews; Reggie Jackson and Darryl C. Johnson; Uncle Sherman and Aunt Lucille. WILL EARNEST JOHNSON leaves to cherish his memories, his daughter: Kanisha M. Johnson; his son: Michael Bedford; 5 grandchildren: D’Vanity D. Mitchell, Jeremy J. Riley, Mekhi Ruiz, Mileena Ruiz, and Amiyah Bedford; 2 brothers: Clarence Johnson and Pastor Earlie (Betty) Johnson; 2 sisters: Lorene (Pastor Robert) Williams and Zenobia McElrath-Bey; 13 nieces: Sharon, Bridgette, Theresa, Gwendolyn, Naomi, Cheryl, Linda, Shirley, Gale, Diane, Valerie, Kenya, and Lannette; 6 nephews: Duran, Stanley, Anthony, Michael, Earlie Jr., and Orpheus; good friend and music collaborator: D’Lois; and a host of great-nieces & nephews, great-great nieces & nephews, cousins, family and friends.

WILL EARNEST JOHNSON nicknamed &#8220;Bozo&#8221;, a name given by his daddy, was born on March 1, 1946 to Earnest Johnson and Louella Bloomingberg-Johnson. WILL EARNEST JOHNSON accepted Christ into his life at a early age, and was baptized... View Obituary & Service Information

The family of Will Earnest Johnson created this Life Tributes page to make it easy to share your memories.

WILL EARNEST JOHNSON nicknamed “Bozo”, a name given by his daddy,...