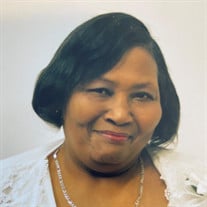 Willie Mae (Willa) Carpenter Hobbs was born February 27, 1942 to the union of Eddie and Fannie Mae (Wilson) Carpenter in Tchula, Mississippi. She was the third of seven children Sarah, Walter, Augustine, Ronald, Calvin and Gregory. Willie Mae (Willa) started her education at a grade school on the Crawford Logan Plantation in Tchula, MS at Jerusalem Missionary Church. The family relocated to Chicago, Illinois in 1953, when Willa was 11. It was here she received her education at Douglas Elementary and Wendell Phillips High School. Willa married Clifton in 1967. Clinton had two children from a previous marriage family, Annie Ruth and Clifton Jr., and together they had eight children Willie (Buster), Edora (Doddie), Carmerlina (Carmie), Frank (Bernard), Cornelia (Coco), and Effrin (Vanderville). She was a devoted wife and mother. She loved her children and grandchildren very much. Willa taught them to cook, sew, crochet, and wash clothes. She knew each child’s personality and assigned them tasks based on their strengths and weaknesses. All the children who grew up on 57th Street she loved and had a special place in her heart for you. She touched many people with her kindness. She held people dear to her heart. Some she would call son, daughter, cousin, niece, nephew, sister, or brother. The kids in the neighborhood called her Mrs. Willie Mae, Mrs. Mae, Mrs. Issa Mae, and Willa, all the grandkids called her Bam Bam. When her grandchildren became grown it was just Bam. Willa began her career at the United States Post Office from 1967-1971. Willa began studying the Bible with Jehovah’s Witnesses and after making the truth her own, she got baptized at the Divine Victory Assembly on January 15, 1972. She spoke to everyone she met about Jehovah. She was known for always having her Watchtower and Awake magazines with her. Even while she was sick she faithfully preached God’s word and maintained pioneer hours. She constantly spoke about Jehovah and she dedicated 49 years of her life to his service. On March 3, 2021, Willa Mae (Willa) Hobbs fell asleep in death. She was preceded in death by her husband Clifton; two siblings Sarah and Gregory; one son Willie; one daughter Annie Ruth; and two granddaughters Tatiana and Brooklyn. Willa leaves to cherish her memories, 6 children Clifton (Nancy), Edora, Carmerlina, Frank, Cornelia (Gardell), and Effrin; 15 grandchildren Tyrice, Triesha, Tyshawn, Beyunka, Devin, Lil Effrin, Terrence, Tyler, Amari, Carnell, Kenneth, Monique, Crystal, Clifton III, Marcus; 19 great grandchildren, 4 great-great grandchildren, 4 siblings; a close friend Rose Washington who she spoke to two to three times a day; and a host of relatives and friends too numerous to mention.

The family of Willa Mae Hobbs created this Life Tributes page to make it easy to share your memories.

Send flowers to the Hobbs family.