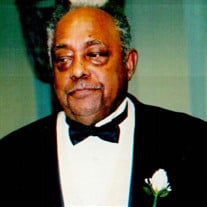 WILLIE B. ALEXANDER “To everything there is a season and a time to every purpose under the Heaven” Eccl. 3:1 A TIME TO BE BORN Willie B. Alexander was born on October 24, 1927 in Lambart, Mississippi, to J. B. Alexander and Maggie Bryant. Willie was the oldest of seven (7) children. Both his parents and siblings (J.B, James Lee, and Jean Alice) along with one son Rickey preceded him in death. A TIME TO BUILD Willie was nurtured in a Christian home and at an earlier age, he confessed his belief and put his faith in Christ as his personal Savior. While living in Paducah, Kentucky, he joined and was baptized at Husband Street Baptist Church, but later joined The Old Rugged Cross Missionary Baptist Church of Chicago, Illinois. Willie became a Mason and truly treasured his membership in the orgranization all his life. A TIME TO LOVE Willie met and married Delores Beasley, in Paducah, Kentucky in 1947 and to that union Erma Jean, Wilma, and Laretta was born. Willie later met Lee Langston in 1989 and in 1994 they were married. Although, they had no biological children, he became father to Lee’s daughter, RaShonda and son Keion. A TIME TO SERVE Willie attended school in Kentucky and became an automative mechanic. During his early employment years he worked for the Doable Rubbers Tire Company. In later years he went on to work at Groen and Dover Process Equipment Company in Elk Grove Village, Illinois as a polisher and grinder until he retired. A TIME TO DEPART On Thurday, November 9, 2017, after battling illness for many years, Willie fell asleep in death. His family looks forward to a time that he will be welcomed back to paradise promised at Revelation 21:3-4 “And He shall wipe out every tear from their eyes, and death will be no more, neither will mourning, nor outcry, nor pain be anymore. The former things have passed away.” A TIME TO MOURN Willie will be missed by all who knew him but especially his beloved and devoted wife of 23 years, Lee N. Alexander, both his and her children: Erma (William-deceased) Robinson, Wilma (James-decased) Lilly, Laretta (Alfred) Dagley, RaShonda (Randy) Riley, and Keion (Marie) Hinton, Gloria Gray, Ernest Horton, Evelyn (Carl) Worthy, along with BaSheba Davis and Thomas Alexander; his siblings: Ella Mae Wright, JoAnn Polk, Maggie (Clint) Mallory, and Lorraine Forest; grandchildren: Alonzo Allen, Malcom Dyer, Vincent (Tesha) Dyer, AuDrina Gantt, Nicole Hicks, Orlecia Rice, Shanese (Jackie) Richmond, Regina Washington, Kevin Williams, Great grandchildren: Maya French, Bryant Hicks, Corky Hicks, Williams Hilliard, Keyuana Hilliard, and Ahgia Washington, Aaon Williams; and a host of great great grandchildren, nieces, nephews, relatives and many friends.

WILLIE B. ALEXANDER &#8220;To everything there is a season and a time to every purpose under the Heaven&#8221; Eccl. 3:1 A TIME TO BE BORN Willie B. Alexander was born on October 24, 1927 in Lambart, Mississippi, to J. B. Alexander and Maggie... View Obituary & Service Information

The family of Willie B. Alexander created this Life Tributes page to make it easy to share your memories.

WILLIE B. ALEXANDER
“To everything there is a season and a time...

Send flowers to the Alexander family.