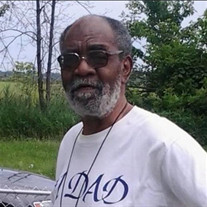 Willie C. Blue Jr. was born on January 25, 1934 in Charleston, Missouri. Willie was a loving, kind hearted, hard working and devoted husband and father. He was well known, well loved and respected by everyone. Our father was an Army Veteran.... View Obituary & Service Information

The family of Willie C. Blue Jr. created this Life Tributes page to make it easy to share your memories.

Send flowers to the Blue family.