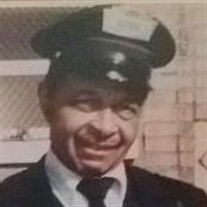 Woodrow Johnson was born on January 21, 1928 to Charlie and Viola Johnson in Lake Vista, Alabama. In his late teens, Woodrow enlisted in the U.S. Army where he served in the Korean War. After completing his military service, he received an Honorable Discharge. He returned home and started employment with a logging company as a truck driver then later worked at the Monsanto Company for a period. In 1967, he moved to Chicago, IL and started working at the Indiana Steel Mill for a short period of time, then later started employment with the Chicago Transit Authority (CTA) where he remained for 29 years and then retired in 1993. Woodrow loved taking care of his family, even until the very end. He loved being surrounded with his children, grandchildren, nieces, and nephews. He enjoyed cooking, shopping for food, and entertaining family and friends. He was always known for his Pineapple Pudding and Fried Turkey. People would always request it, mostly for special occasions. He loved traveling and visiting his family and friends down south. He loved fishing, tinkering with his cars, and hanging out with all his friends, especially Thaddaeus Tucker, who helped take care of him in his last days. Out of all that he enjoyed, he mostly liked being at home relaxing and watching TV. We will always cherish his love and all the beautiful memories that he has left us all. His presence, smile, and sense of humor will definitely be missed. On October 10, 2020, Woodrow fell asleep in death. He is proceeded in death by his parents, Charlie and Viola Johnson; son, Jerry Johnson; 10 siblings, Peter Johnson, Lee Johnson, Ollie Abrams, Minnie Jones, Willie Clyde Johnson, Robert Johnson, Lucille Barns, Helen Brown, Delloyd Johnson, and Mary Reynolds. Those who mourn, but cherishes his memories are spouse, Elizabeth Johnson; sons, Woodrow (Rusty) Johnson Jr., Michael Lawson, Curtis Lawson (Lisa), Winslow Johnson (Tatiana), and Corey Johnson; daughters, Phyllis Marie Johnson Dottery, Lynn Johnson, Theresa Stanley, Joyce Eufrosyne Williams, Erica Johnson, Kia Washington, and Amber More; brothers, Jessie Johnson and Dewey Johnson; and a host of grandchildren, nieces, nephews, cousins, family, and friends.

Woodrow Johnson was born on January 21, 1928 to Charlie and Viola Johnson in Lake Vista, Alabama. In his late teens, Woodrow enlisted in the U.S. Army where he served in the Korean War. After completing his military service, he received an... View Obituary & Service Information

The family of Woodrow Johnson created this Life Tributes page to make it easy to share your memories.